There are some game designers out there that have extraordinary visions for new games. Some of them have undertaken ambitious projects that put them under intense strain, like Jordan Mechner (Prince of Persia) and Eric Chahi (Out of this World), both of whom made games with very small teams and limited resources. Then there are those with greater resources that push the envelope with big budget titles like Ken Levine (BioShock) and Cliff Bleszinski (Gears of War). However there are also those whose vision exceeds practicality. Probably the most well known developer like this is Peter Molyneux, who is notorious for heading projects that promise the stars, but a ultimately hindered by what is feasibly possible with that is available. This is not to say that all these projects end in disaster. The original Fable, although not as grandiose as promised, was still an enjoyable adventure game and Black & White, a simulation game similar to Sid Mier’s Civilization, was given critical acclaim at release.

A designer with a very similar track record to Molyneux is David Cage. Cage founded the studio Quantic Dream in the late nineties and has been deeply involved with the development of each of their games. Quantic Dream’s games are advertised as interactive movies that are directed by the player’s actions. The titles advertise high production values involving intensive use of motion capture to achieve as realistic an experience as possible, and while the graphical capabilities of their earlier titles hindered the visuals, their later works have taken advantage of advances in graphics, motion capture and facial mapping technology to create much more visually interesting experiences. Today we are looking at their second game called Indigo Prophecy in the US and Fahrenheit elsewhere. 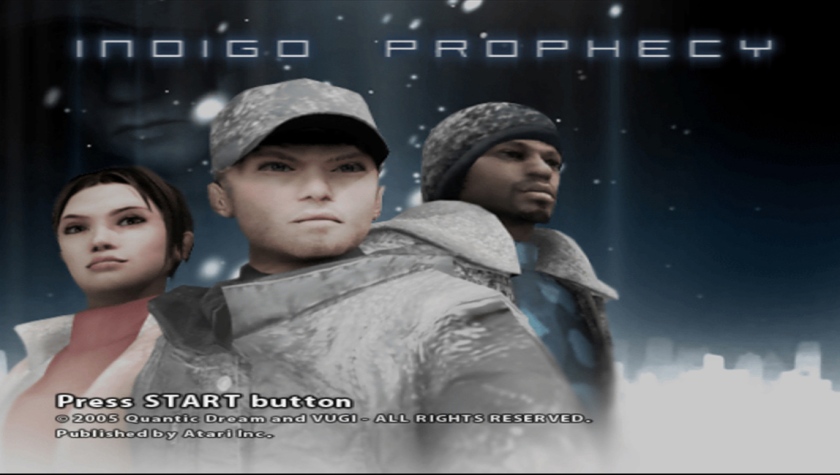 In a small diner in New York City, Lucas Kane has a vision of himself killing a stranger in the bathroom, only to come to and realize he really did commit the murder. After escaping the scene, Kane begins to experience horrible hallucinations and appears to be pursued by a shadowy organization that may be responsible for the tragedies that surround him. Meanwhile, NYPD detectives Carla Valenti and Tyler Miles are investigating the murder at the diner and while following up on some clues, discover that the murder appears to be another in a series of ritualistic killings that have occurred over decades. You control all three characters at various points in the investigation as both the suspect and the police. As Lucas, you will have to evade capture long enough to discover the reason behind all that has happened, but as the police you must do everything to close the distance between them and the murderer.

This title, like all of Quantic Dream’s games, has a very enticing premise. As players, we are as in the dark as all the characters, and are uncovering the mystery right along with them. All that needs to happen now a satisfying pay off for all the build up, and this is where Indigo Prophecy’s most infamous quality comes into play. In the middle of the game, things have built to a fever pitch, the police are narrowing in on Lucas, the conspirators, cultists looking to bring about a doomsday prophecy, have kidnapped his girlfriend and potentially murdered his brother to draw him out and right as things get their most tense, Lucas is killed. We then cut to shortly after with Carla visiting his grave when suddenly Lucas appears to explain that he was brought back to life, no joke, by aliens. The conspirators were Mayan priests who possessed Lucas to kill the man at the diner, inadvertently unlocking his latent super powers which he developed in utero while his mother worked on an alien artifact in Roswell, New Mexico. The alien AIs, called the “Purple Clan”, intend to use Lucas to discover the whereabouts of the “Indigo Child”, a child with the ultimate knowledge to save the world or destroy it, and all the homeless people in New York are actually an ancient order who have conspired to stop both evil factions. This whole thing makes very little sense, and while some of it could be seen coming, the introduction of so much crazy so late in the game makes it impossible to take seriously.

On top of this, the overall story progression is a little unsatisfying. Throughout the game, you are given the reigns to direct the characters through each scene. You explore the area, question bystanders, and periodically you are given an opportunity to make a decision that may end in the death of a character. Unfortunately, most of your input makes very little difference. Characters will come to the same conclusions on their own regardless of weather you find everything or miss something. For example, there is a scene where you help make a composite drawing of Lucas with a witness. You can make it look as right or as wrong as possible, but the rest of the game will be unaffected. There is a scene where you can allow Lucas’ brother to be killed by the priests or help him escape, but the only thing it changes is Lucas’ health bar, and one scene later on where the brother is just sitting in the background. As much as the game says your actions have consequences that is only barely true. 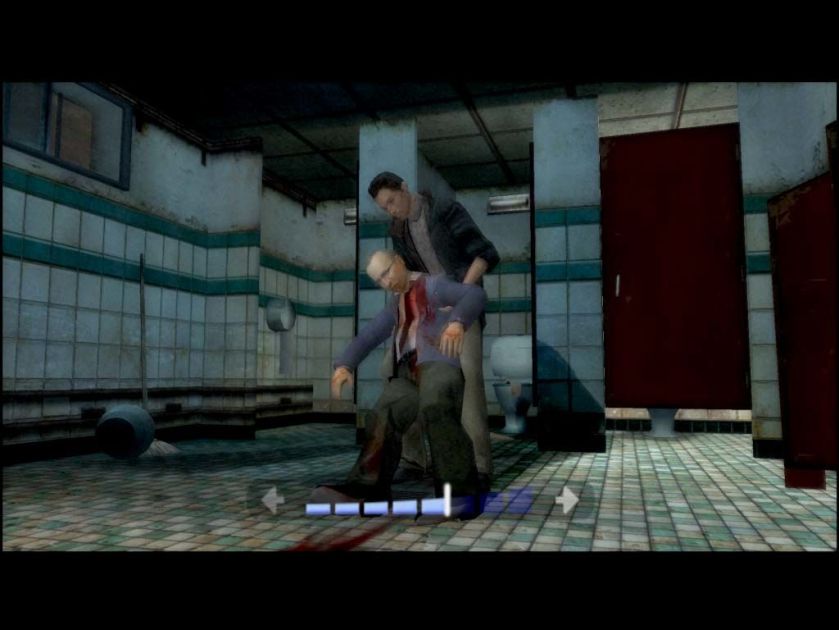 Indigo Prophecy has two main modes of play, an exploration mode, where you have free reign to look around an area to solve puzzles or uncover clues, and the quick time events. The latter takes up most of the more striking scenes and that is a real shame. Something truly interesting or at least intensely over the top will be happening, but you can’t look at it because you have to focus on the button prompts appearing on screen. However, the effect felt by your choices and actions in the game is manifest in your health bar. Your health is measured by your mental health. At best you are neutral, and any loss brings you through stages of depression, ultimately ending in your character being suicidal. When that happens you lose a life, and after all lives are gone it is game over.

Very minor things in levels can alter your mental heath. Drink some water and see an increase in health. Play the guitar well and see an increase in health. Perform badly in a mini-game and you may lose mental health. Eat bad food and lose mental heath. The effect on your health is largely proportional to the importance of the encounter. For example, if you decide to stay at home with Tyler’s fiancée, he will gain health, but since that makes Tyler late for work, he will lose some when he arrives and gets chewed out. This dynamic gameplay is interesting and motivates you to explore, but it is for the most part pointless because your character’s mental health has no effect on conversations or the way scenes play out, and the big scenes in the game all use quick time events that tend to kill you outright if you fail. 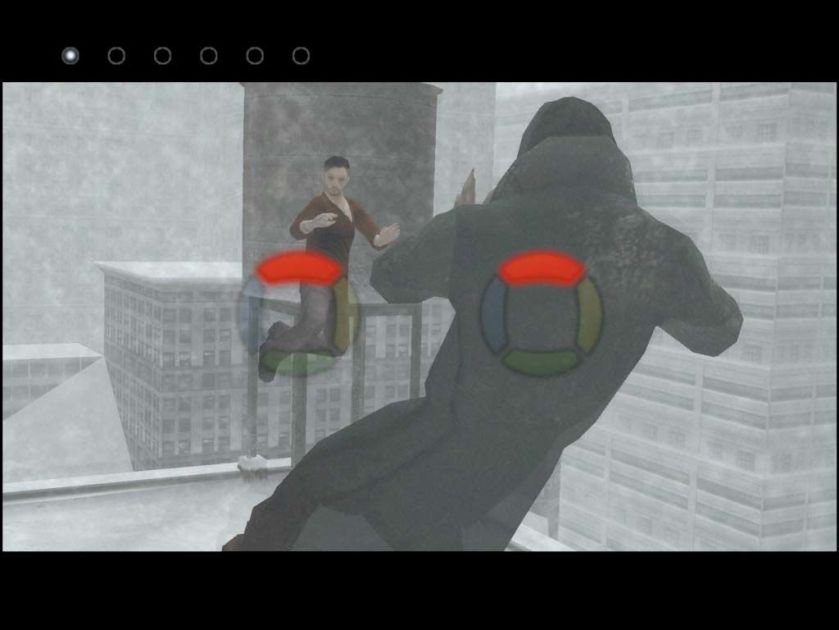 The graphics are pretty good for the time. The use of motion capture makes all the movements realistic and the environments look good. A lot of effort went into the choreography of the action set pieces, but unfortunately, those are the scenes that require you follow quick time events, keeping you from fully appreciating what your watching. For the most part, the acting is good. David Gasman as Lucas gives a very invested performance, and other actors, like Barbara Scaff as Carla Valenti and Doug Rand as Markus Kane, do a good job. On the other hand the game does have its share of over the top actors as well, and the lines about the more ridiculous plot points are hard to deliver in a serious manner.

Angelo Badalamenti, who worked on films and shows like Blue Velvet and Twin Peaks, composed the score. The music is very well suited to the game and does a lot to emphasize the emotional scenes of the game. There are some tracks that are a little jarringly happy and out of place, but they are few and far between. The rest of the soundtrack is licensed rock music that you can optionally listen to. It’s not bad, but because it’s optional you probably will play through the game without ever hearing it.

Although the game starts in a promising way, the restrictive gameplay and the insane turns the story takes leave you with an overall unsatisfying game. Although there are a lot of weird things happening, the game takes very little time to elaborate on them, which leaves you utterly confused most of the time. Much like David Cage’s other projects, there is an interesting scenario, and ambitious presentation, but it is ultimately weighed down by the repetitive quick time events and shallow illusion of choice. In the end, I can say that Indigo Prophecy can be an entertaining game if you don’t take it very seriously and anticipate the goofier moments.

This is focused on my pixel art, including the banner art from my reviews.